Marcin Typewriter is the monospaced interpretation of Marcin Antique, our contemporary reimagining of French gothic types produced in the late nineteenth century by the Fonderie Gustave Mayeur.

The Mayeur Type Foundry, based in Paris, was active from the 1870s through the 1910s, publishing a remarkable collection of magnificent specimens showing intricate ornaments and borders, flamboyant initial capitals, and a wide range of typefaces for text and display use. In designing the Marcin types, we referred to the ‘Antiques’ or grotesques; especially those shown in the later 1894 and 1912 editions of the “Spécimen-album de la Fonderie Gve. Mayeur, Allain Guillaume & Cie.”

Instead of emphasizing the more mechanical and technical aspects often associated with monspaced fonts, Marcin Typewriter takes the contrast and tone of Marcin Antique and simply adapts it to the restrictions of monospaced typefaces without superfluous adornment. The result is a “soft” and legible monospaced typeface suitable for a wide variety of uses, and which neither looks too nostalgic nor too techy. Marcin Typewriter comes in six weights with matching italics; the two lightest weights of Marcin Antique, Thin and Extralight, are not represented with monospace variants.

Marcin and Marcin Typewriter share the same set of stylistic glyphs which can dramatically change the rhythm and feel of text set in the types. Stylistic Set 1 provides a tail-less a and unicameral — aka “schoolbook” — g. Stylistic Set 2 replaces the “Helvetica-ish” default R with a straight leg variant more akin to Franklin Gothic. Stylistic Set 3 replaces the default Qs “external tilde” tail with a “tilde-through” tail.

As in Marcin Antique, Typewriter’s italics are sloped romans rather than stylistically true italics; true italics being based on scribal forms. The 16-degree slope of the italics is greater than one would usually see, and contributes to the italics’ striking appearance. In order to compensate for the darker color of the sloped forms, the italics’ weights are mathematically lighter than their roman counterparts.

We would like to thank Ramiro Espinosa, Ben Kiel, and Joana Correia for their help during the development and production process, and hope you enjoy using Marcin Antique as much as we enjoyed designing it. 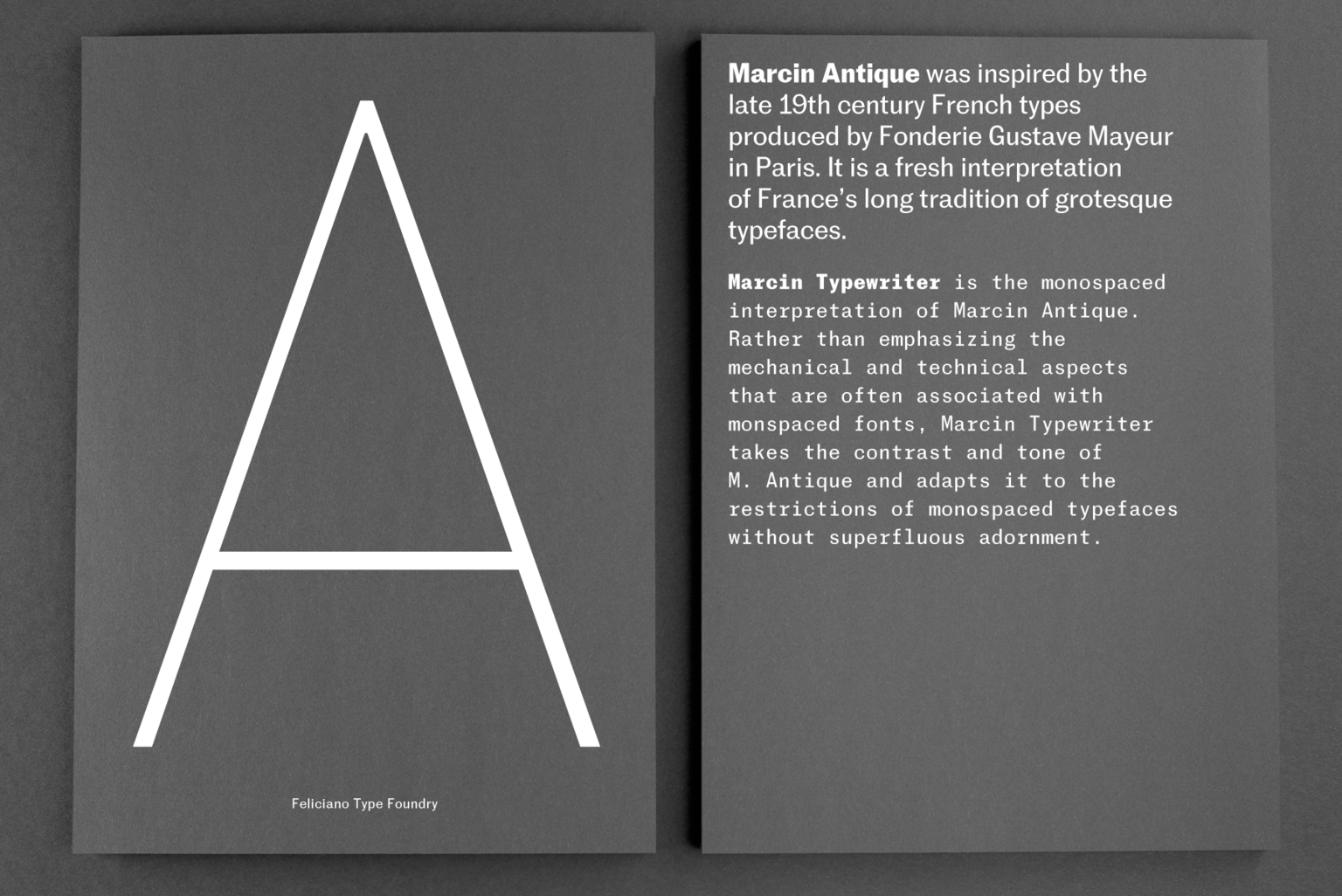