Router exists at the intersection of mechanical and organic. Unlike other rounded sans serifs with simple rounded terminals, Router flexes outward, mimicking the physical process of carving letters into plastic or metal. These details function exceptionally at display size, and disappear to a satisfying effect in text, creating a legible, organic, and evenly colored body copy.

I remember clearly the day I was waiting for the 6 train at 33rd Street and Park Avenue in New York. I had taken pictures of type on the street for some time, but there was something here that caught my eye. There was a plastic sign on a door with letters and numbers routed out of plastic, and I noticed a couple of characters in particular: the way the 8 curved back into itself, the charming tail of the a. And then I realized that the lowercase e’s were all different. This had been done by hand and therefore wasn’t an existing typeface. I knew then that I could actually make this into a font.

This moment of inspiration in a subway station was the beginning of the year-and-a-half process of designing my first typeface, and the start of an obsession that would permanently change the way I experienced the world. I thought I knew a lot about type as a graphic designer, but I soon realized that the art of typography went much further and deeper than I could have imagined.

Having photographed the subway sign, I fired up Illustrator, and later FontLab, and started putting down points and pulling away at the beziers. One thing that really helped early on was opening up some of my favorite fonts in FontLab. I would look at how the points were arranged and the forms were constructed, and would flip and rotate the drawings to see what sort of optical corrections had been made. I found it intriguing to see that many glyphs that appeared symmetrical, like the O in Gotham, were subtly lopsided.

Though I was learning a lot on my own, I needed something more structured. I enrolled in a type design class at Cooper Union, but just days before it was to start it was cancelled. So, I contacted the instructor, Hannes Famira, and started taking private lessons. Hannes had studied at the Royal Academy in the Hague, where he was exposed to the Dutch school of type design. He taught me about Gerrit Noordzij’s Stroke of the Pen theory, the idea that there are two fundamental categories of lettering based on the broad-nibbed and pointed-nibbed pens and that serifs are just an expression of contrast. I did calligraphic exercises based on these ideas as well as drawing experiments with Frank Blokland’s Lettermodel modular type system.

This is how I first learned to evaluate drawing in type design. I went to Hannes’ once a week for the better part of a year, spending two and a half hours with him at a time. Every week I would show Hannes the progress on my typeface, which I was calling Router. He’d get out his red pen, and we’d go through and mark up the drawings. We’d talk about the things he was seeing, and the things I was trying to do. I was initially focused on some of the quirkier aspects of the subway sign, like the narrow f and t, and the strange r. I eventually abandoned those elements as I realized that Router was about something else. As other type designers have noted, self-editing is a crucial part of the process.

But then a funny thing happened. I kept correcting and correcting, and all of a sudden I had sanitized the font and there was almost no personality left in it. What I was left with might as well have been VAG Rounded. In a very early draft, I had played with the idea of exaggerating the swellings in the strokes from the original sign. Now I resurrected that, and found the true character of the font.

In addition to working with Hannes, I reached out to other type designers whose work I admired. One of the first people I contacted was Chester Jenkins at Village. I liked that his company was set up as a co-op, run by designers who all did great work.

Once I had decided to release with Village, I started working toward a full draft of the family. Chester sent me files of Apex to show me the character sets they required. At first I was overwhelmed. I didn’t think I could possibly draw a font with about 1000 glyphs in each style. Fortunately, a lot of those are accented characters which can be created through components (linked references to other glyphs), but there are still several hundred original drawings in each of the styles. I had a lot of fun drawing some of the peripheral characters and finding ways for everything to follow the rules of the font, asking questions like “How can a triangle be routed?”

I spaced the font using the control characters H O n o. Once I had the correct sidebearings for these characters I applied those values to all the glyphs that have straight or round sides (with some adjustments). Then I placed each character in the string HHAHOAOO for uppercase and nnanoaoo for lowercase, where A or a is replaced with the current glyph. Spacing the italic was a counterintuitive mystery — the only character that has the same sidebearings on both sides is the lowercase o, and you build everything off that.

In order to generate the in-between weights (extralight, light, and medium), I made interpolation tests. I did all of the drawing of the thin, book, and bold in Fontlab and then used Robofab (python-enabled Fontlab) to generate UFO masters (Unified Font Objects). Then I opened the UFOs in Prepolator to make sure all of my characters were interpolatable and used Superpolator to do the actual interpolation. Finally, I re-imported the UFOs back into Fontlab and checked each glyph for errors. It’s a lot of steps, but it’s superior to using either the Multiple Master or ‘blend’ action within Fontlab because it’s much more flexible and precise, capable of generating instances that require minimal redrawing.

Router was Jeremy Mickel’s debut release through the Incubator; his Village consigliere was Christian Schwartz. 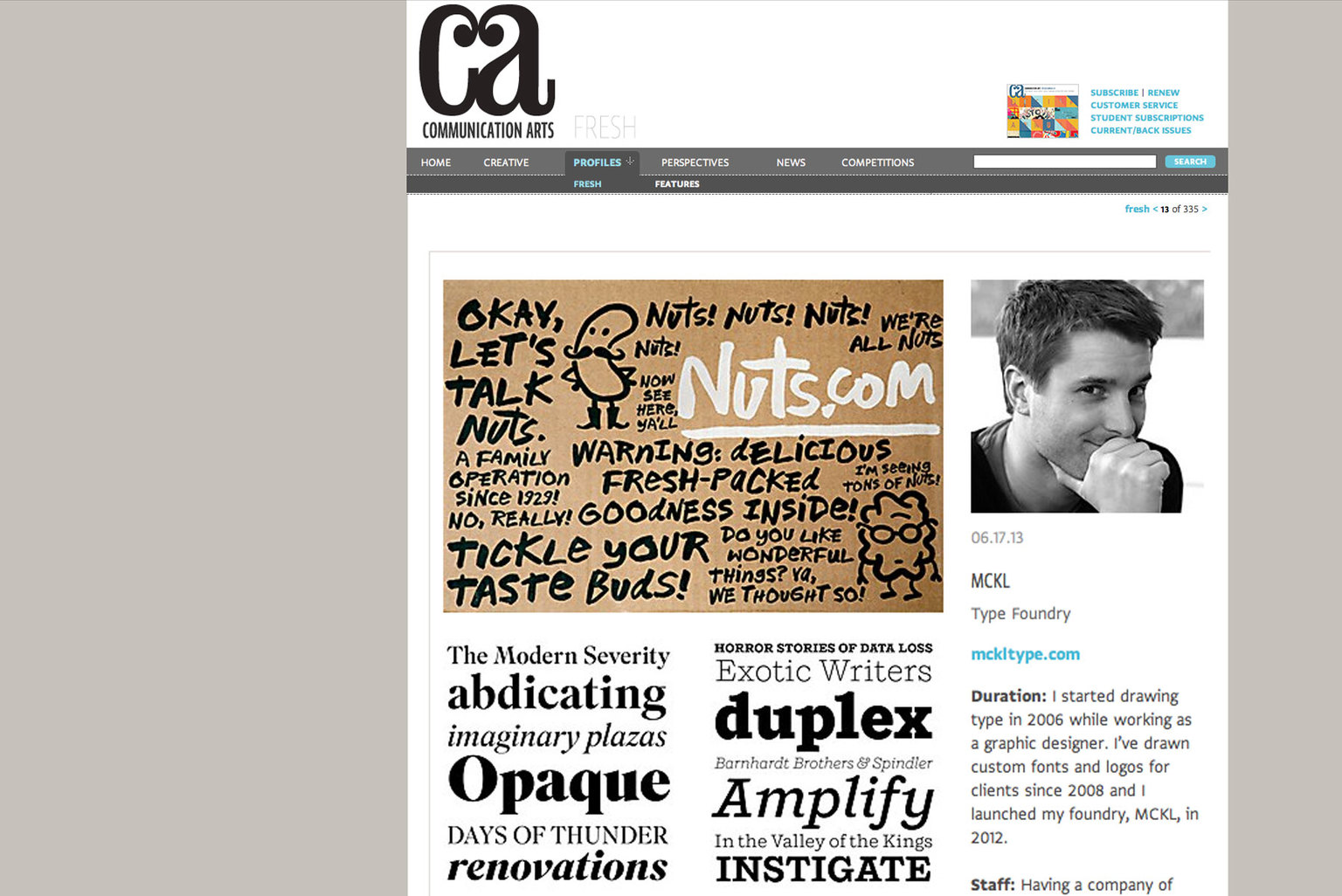