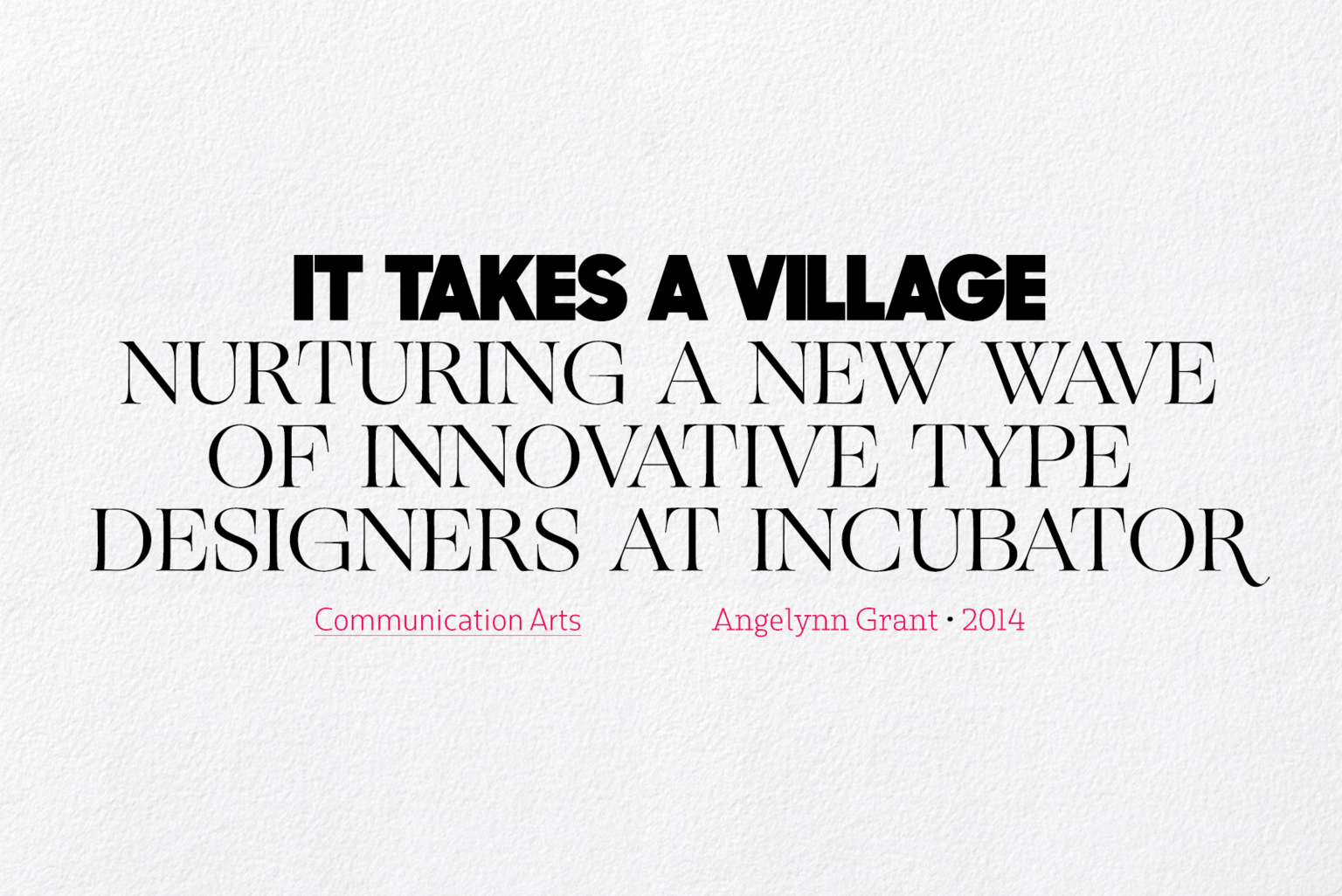 In the past decade, “incubators,” businesses where the experienced help nurture the new, have been popping up in a wide range of fields, from tech startups to nonprofit creative arts organizations. The aptly named Incubator is one of the first such programs specifically dedicated to type design. It’s one part of Village, a small, independent type distributor, publisher and type design studio based in the Dumbo (Down Under the Manhattan Bridge Overpass) area of Brooklyn. The name Village derives from its original location in New York’s East Village and its structure as a collection of member-foundries with a cooperative connection.

In the past decade, “incubators,” businesses where the experienced help nurture the new, have been popping up in a wide range of fields, from tech startups to nonprofit creative arts organizations. The aptly named Incubator is one of the first such programs specifically dedicated to type design. It’s one part of Village, a small, independent type distributor, publisher and type design studio based in the Dumbo (Down Under the Manhattan Bridge Overpass) area of Brooklyn. The name Village derives from its original location in New York’s East Village and its structure as a collection of member-foundries with a cooperative connection. It includes top type designers from around the world and membership is by invitation only. Just as carefully selected, the “Incubatees” are up-and-coming designers who come to the attention of Village founders Chester Jenkins, former partner of Thirstype, his wife Tracy and other members of the group.

Launched on Village’s three-year anniversary in 2008, Incubator helps designers develop their typographic voices and get their fonts ready to sell with “gentle guidance” from Village members. “We were already kind of incubating before Incubator,” recalls Jenkins. He and longtime Village member Christian Schwartz of Commercial Type mentored Kris Sowersby, now a Village member in his own right, while he was preparing his debut release, a curvy serif called Feijoa, for his foundry Klim in the mid-2000s. “Christian and I each worked on a custom type project with Kris, and I worked with him on the technical aspects of bringing Feijoa to market. We had already committed to having a dedicated slot for Kris in Village and he has always been an incredibly talented and skilled designer, but preparing type for market is much more involved than most people realize, even those who have self-published type.” Another pre-Incubator incubatee was Hugo d’Alte. “We worked closely with him to prepare his typeface Kaas for publication in 2005 and released that through the Thirstype label,” Jenkins says. So the idea to incubate fell out naturally from the process of guiding typefaces to market. But Incubator as another foundry within Village was not officially formed until the release of Jeremy Mickel’s Router in 2008.

Mickel found inspiration for Router in some handmade signage under the streets of New York: words router-etched out of plastic in the subway station at 33rd and Park. Mickel was familiar with Village; he and Jenkins had previously met at what Jenkins calls “type geek nights in NoHo” back in 2006. Because Village specializes in a hand-picked and varied collection of type styles, Jenkins could see that Router would be a nice addition to the roster. “We knew that we wanted to release Router,” notes Jenkins, “but didn’t feel that it fit into any of our existing channels. Which is when we lit upon the idea of having an incubator, which would allow us to publish types—usually first designs, sometimes student work, always interesting—without the kind of ‘marriage’ that is involved in having a foundry slot at Village.”

Both Jenkins and Schwartz gave Mickel feedback, each focusing on different aspects of the design. “I had gotten to know Christian Schwartz and he became a mentor for Router,” says Mickel. “He’s listed as my Village Counsel as he answered many technical questions and gave drawing feedback during its development. But Chester was also very involved, offering his opinion and expertise the whole way through.” The one-on-one counseling came at a good time for Router. “I still had a lot to do. I think I had completed a full draft of Router Book and Book Italic and done sketches of the other weights. But it was about a year after I first agreed to publish Router with Village that it actually got released. Village understands that good type takes time and they have never pressured me to release anything before it was ready.” Mickel is now a full Village member with his foundry MCKL , and Router was included in the 2012 exhibit Graphic Design—Now in Production, co-organized by Smithsonian Cooper-Hewitt, National Design Museum and the Walker Art Center.

Incubator has grown in the past five years to eight releases, with many more coming up. Lucas Sharp, another Incubatee, gives a good description of the easygoing nature of Village. His project is Sharp Sans, a geometric, humanist sans serif. “I submitted it directly to the designers of Village, who got back to me that they were interested in publishing it after a few meetings. I actually met Chester in person when I ordered all the specimen books off the Village website and, since I was working out of a studio in Dumbo at the time, he hand-delivered them to me on his dog walk. I was originally mentored by Joshua Darden and worked as a draftsman at the Darden Studio before I went independent, and Chester picked up where Josh left off in terms of my typography education. There isn’t any kind of pairing system, but Chester and Tracy make themselves available to look at work, and if you want to get another Village designer’s take, you can just e-mail them and they are responsive. I’ve found that indie type designers in general tend to be friendly, helpful and accessible.”

Even with the generous design feedback, Incubator is not a type design school. As Sharp explains, “Incubator is more of a publisher than a mentor. Yes, they are very helpful and can really help take burgeoning talent to the next level, but they are not finding talented novices off the street and turning them into world-class type designers. If you get into Incubator, you obviously have something going on and are looking to get away from the corporate typeface-reseller publishing scene. Most people start on one of the other behemoth type resellers that simply throw your font on a pile of millions of fonts and take half your sales. That model tends to favor quantity over quality since resellers are constantly promoting the newest releases, in some cases, from a completely non-curated and constant stream of mostly garbage from all over the world. In that world, it actually makes fiscal sense to do two mediocre fonts instead of one quality font in the same amount of time. There is always a diamond in the rough, but the model definitely promotes disposability over timelessness. Village is a great example of a viable alternative to this issue that is actually inclusive of new talent.”