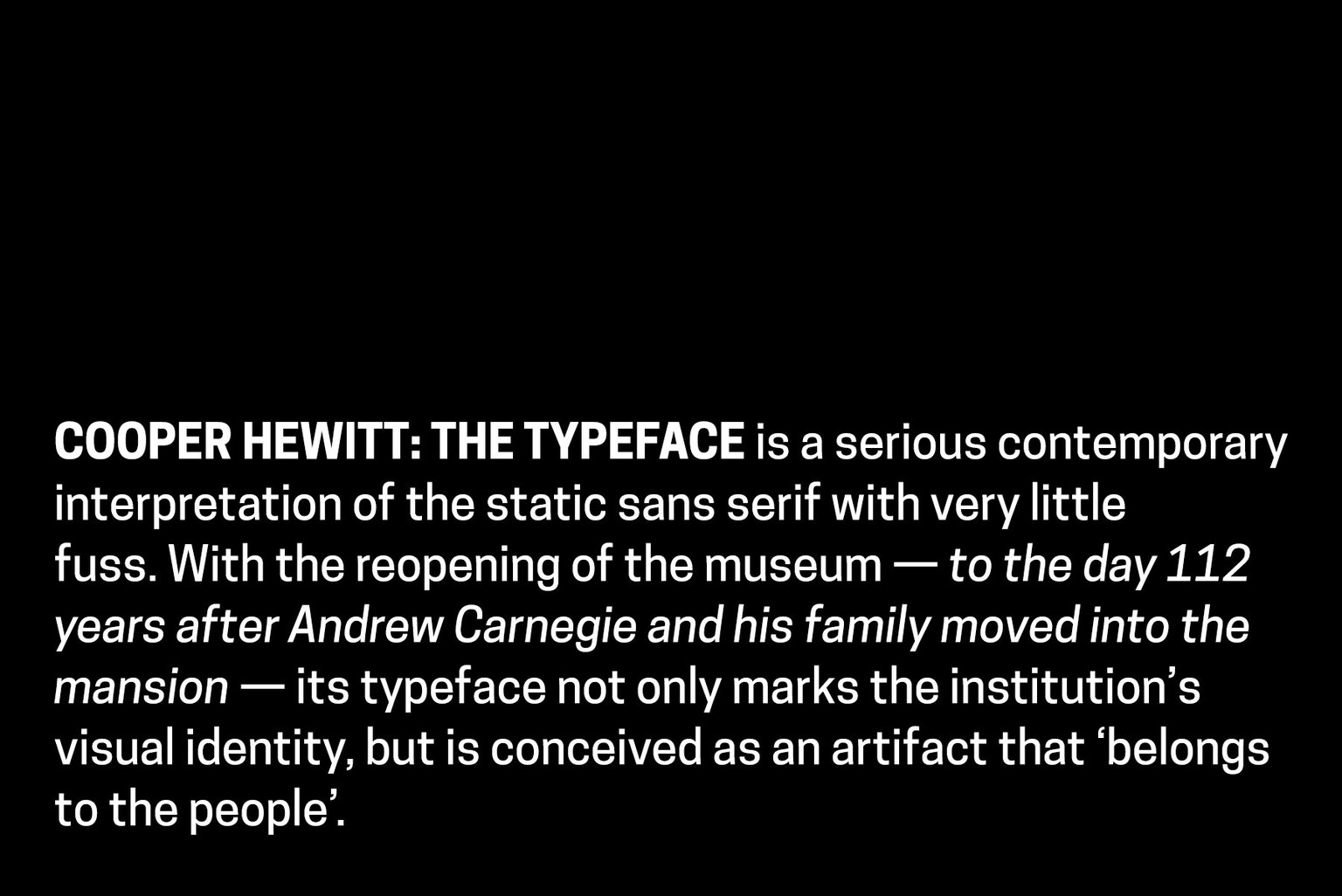 On December 12, 2014, the Cooper Hewitt reopened its collections to the public, equipped with a new corporate design by Pentagram’s Eddie Opara and a custom typeface by Chester Jenkins, cofounder of Brooklyn-based Village. This new typeface rightfully bears the name of its owner — yet it is not exclusive, but available for free.

When taking a first close look at Cooper Hewitt: The Typeface, one cannot deny its strong family resemblance to Jenkins’ typeface Galaxie Polaris, specifically the condensed weights, released back in 2008 under the Constellation label at Village. This connection is rooted in the design process and an exchange between Opara and Jenkins. Polaris’ condensed weight was in favor for the museum’s new branding at first — with slight adaptations and adjustments — and soon Jenkins was commissioned to execute some of the “tweaking” himself. Ultimately the regular weight was too wide and the condensed seemed too narrow; a semi-condensed (beta version) resolved the matter rather swiftly. It seems likely that Jenkins would have continued to work on that font data; in an interview with Stephanie Murg, however, he pointed out that Cooper Hewitt was drawn entirely from scratch with Polaris merely serving as a rough guide.

A significant stylistic detail of Cooper Hewitt lies within the straight horizontal and vertical stroke endings (versus the angled terminals in Polaris). This modification becomes apparent most notably in a c e or s. Jenkins added straight segments to all letters with round shapes, a feature that provides an elegant feel overall (apparently this made the drawing of the italics “a nightmare”). Cooper Hewitt and Polaris share the same width in most letters (except for M and W); the tail in Q was changed to a straight stroke crossing the bowl, which is much more adequate for a static sans serif.

One of the important characteristics of this quality typeface is its availability as a free download; files for print, for web, and as open source code can be obtained through the museum’s website. In reference to the Latin proverbs e pluribus unum and ex uno plures, Eddie Opara pointed out in a talk at the Greene Space WNYC that “the premise was to define a system as one and then allow the public to take it and use it the way they want”. Consequently, the type’s admission into Cooper Hewitt’s permanent collection was followed by its accessibility, encouraging the public to use and experience it.

This may not be the first concept of its kind, yet it is unusual and brave for custom type and it is rightfully a noteworthy face of 2014. Cooper Hewitt: The Typeface is a serious contemporary interpretation of the static sans serif with very little fuss. With the reopening of the museum — to the day 112 years after Andrew Carnegie and his family moved into the mansion — its typeface not only marks the institution’s visual identity, but is conceived as an artifact that “belongs to the people”.

Read the review on Tyopgraphica…